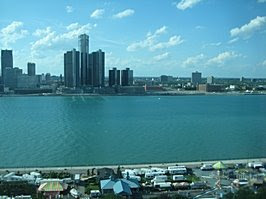 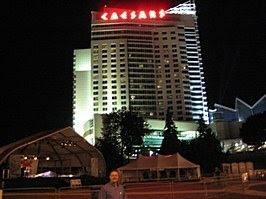 
Whew, what a great weekend! It had it's ups and downs, wins and losses, great food and not so great food! We met a great new friend from SBI, the site building company that I use to build the sites, - Tracy from Tips to Organize Life and had some interesting issues at the US/Canada border.

Warren and I took a mini break to Windsor, Ontario Canada this long Canada Day Weekend. We like to go to Vegas for our mini breaks, and usually stay at Caesar's Palace. However, due to other work issues, we didn't want to be too far from Toronto in case we had to come back quickly. (which thankfully we didn't!). The casino in Windsor was recently bought out by Caesar's and their mother company Harrahs Entertainment. They invited us to come down for the weekend and see their changes. Wow what an improvement! 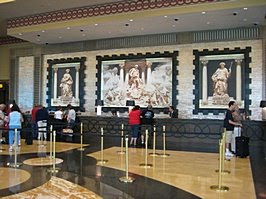 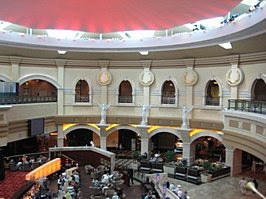 The New Lobby, Front Desk and the Vu Bar
We stayed 3 nights in their new Augustus Tower. The rooms are beautiful and really make you feel like you are at Caesars. It was kind of neat. We ate at Nero's Steakhouse the first night (everything but the steak was great - they have to do something about the food on this property). Warren won some money so we were all set to go shopping on Saturday. Michael Bolton was playing in the property's new entertainment centre, the Colossium, so the Casino was packed. 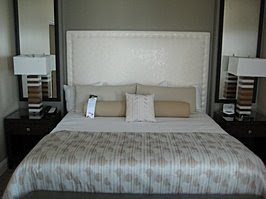 Bedroom of a Junior Suite
We were stunned at how long the line was to cross the border through the Windsor Detroit Tunnel. It was a Sunday and all the Michael Bolton fans were returning home. Also we heard that the Detroit Tigers had a home game that many Ontarians were going to see.

We went shopping at Sym's, a discount shopping store - and found out it was closing :-(. Then we went up I75 to the Great Lakes Crossing Mall in Auburn Hills, MI. When we arrived we found a Costco and decided to check it out. Being from Canada we saw many cool things that we can't get at home so we picked up a few things. We then went over the the Great Lakes Crossing Mall and spent a couple of hours wandering through it. The mall is a great enteratinment destination as it has shopping, movie theaters, great restaurants- including a GREAT sushi restaurant- and a Gameworks. 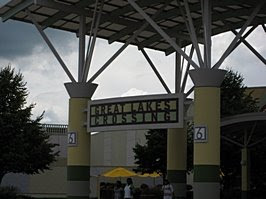 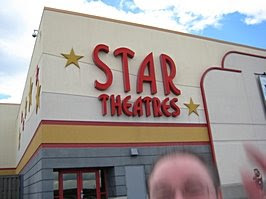 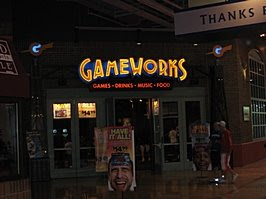 Yes that is Warren's Head in the Picture!

That night we took it easy and played in the casino a bit. We went over to Summerfest - Held at Windsor's Riverfront from Jun 19 - to July 1. It was a carnival and looked like fun, so we went over there for a little while. We have been looking for a mascot for our Excellent Vacation Ideas website, and as we walked by the ducky pull game - Warren saw them! So we just had to chance our $10 and pull some ducks to get our mascot!

We won! - Actually we won a larger prize, however we couldn't imagine carting the larger stuffed animal all over the world. So the wonderful girl Jessie gave us Mr. Quack and Waddles! She let us take her picture and we told her that she was the start of the internet stars Waddles and Mr. Quack! 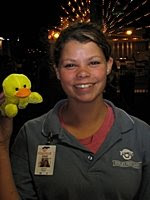 So let me be the first to introduce you to Waddles, and Mr Quack! 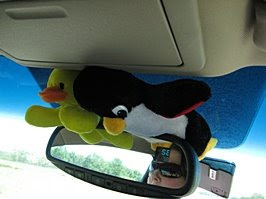 I think we need a better picture - look for them throughout our blog in the future!

On Monday, we went over to Detroit to check out the MGM Grand Detroit and to meet Tracy at Wolfgang Pucks Grill for dinner. We decided to leave early to check out the casino etc before we met Tracy for dinner. It was a good thing we did. We took the tunnel over and when we got through it they had closed the border and were doing random searches of cars. A lady 2 cars in front of us in a Suburban, had her most of her car taken apart! This went on for a good 20 minutes. When we arrived at the border crossing agent, he asked us where we were going. It is always a good idea to be truthful - especially when they are being this careful at the border. So we told him we were going to "check out the MGM property". He asked why we weren't going to the Caesar's Windsor - we said we were staying there. He then proceeded to write up a slip and told us to pull over - the worst words to hear when you are crossing into a US border these days!. So of course we did what we were told and pulled over. They told us to get out of our SUV and leave all electronics and take ourselves into the office. So we did as we were told. We went in and they took their time going through our things and "writing us up". As we were sitting in the office (feeling like we were either criminals or in a movie), we decided then that we weren't going to bother coming over to Detroit anymore! It was getting to be too much trouble - especially as we were honest the whole time! But alas they let us go on our merry way and one of the "searchers" of our car opened a compartment in the SUV that has been stuck for 3 years - we joked with him and he said "we are a full service operation here!" We arrived at MGM and the new property is beautiful, until you walk in the doors and smell the smoke. I forgot what that was like as we don't smoke and the casinos in Canada are smoke free. We walked around a bit and found the baccarat lounge (Warren's Game) - I call it the big peoples lounge as it is always hidden away and the supposed "High rollers" go there. It's quite interesting who you may meet in there. A lovely casino host, James Daniels, came over to introduce himself. He was awesome to talk to and he made us dinner reservations for the Wolfgang Pucks. He really made us feel welcome and made us feel better after all the hassle at the border. I then went to meet my new friend Tracy, that I met online. We had an awesome dinner, talking about building our websites, getting to know each other, and the food was amazing! It was the best dinner and desserts and company of the weekend by far! Thanx for a great dinner Tracy! 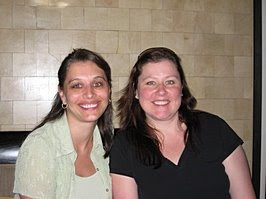 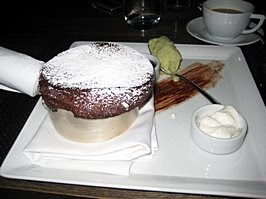 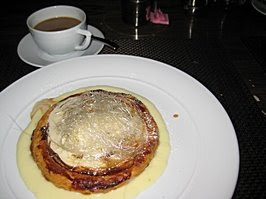 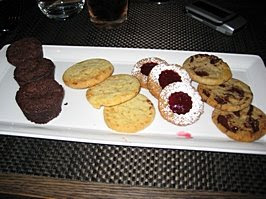 Our deserts at Wolfgang Pucks Grill!
All in all it was a great weekend and I would highly recommend visiting Caesar's Windsor and the Windsor Detroit area for a great weekend away. Especially if their is a show you are interest in. Check out the schedule here.
Thanx to Mom, Dad, April, Dave and Diana for taking such great care of Gracie!