Wow what a difference 16 hours in a plane makes!

It's hard to believe that after only a 16 hour flight, we can be on the other side of the planet! Especially as we were in business class due to my hubby's amazing obsession with air miles :-) 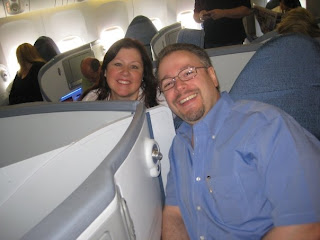 We had an awesome flight from to , then a bit of a wait for a ferry from the Hong Kong airport to . It as absolutely pouring with rain when we arrived, and I was concerned about the ferry crossing.

The one thing that threw us off guard was how serious they are taking the H1N1 outbreak. We had to fill out a form declaring our health - although we didn't really need it as we didn't end up going through immigration.

The second we arrived and walked off the plane, many people had face masks on. To be honest it was a little disconcerting. Most of the people working at the airport had them on. And it made it hard to understand people. We couldn’t see their lips, and they seemed to talk quietly.

Apparently Hong Kong and were experiencing a Typhoon 3. It was some intense rain!

I have to say that they have things very organized at the airport. We got off the plane, had a short walk to the Turbojet desk to buy our ferry tickets. We gave them our baggage claim tickets and they transferred our bags to the ferry for us.

We didn't have to go through the health check or through immigration -we went through another security check which didn't make sense to us, but what do we know.

We sat for a couple of hours checking our email on the free Wi-Fi, and then got on a bus that took us to the ferry terminal.

We chose super class as it wasn't much more it cost and Warren isn't a fan of boats, it was a good choice. We got to sit upstairs on the ferry, many less people they served a snack (it tasted like an egg/tuna salad sandwich on a a sweet bun, a yogurt, a mousse like dessert, and an orange drink-much like a McDonald's orange drink we used to get as kids).

The ride was rough due to the Typhoon. But it was only 45 min. I crashed and don't remember much of the ride. I only had 2-1 hour naps on the plane and it was 4:30 in the morning after all. Well for me anyway. Warren got about 4 hours sleep so be was doing much better.

The best part of the super class was that we got off the boat first. That allowed us to be first in line at immigration. We were shocked by how many people came in the line after us. It was crazy!

The silliest part of the whole journey was what came next... The porters took our bags off the ferry and then brought them to a waiting crowd of people. We hadn't seen our bags since Toronto so we were concerned when after the first 4 carts our bags weren't there.

Thankfully they came on the next cart and we were off....

Summer is Here! - Hazelmail will help us stay in touch!

Montana is getting ready for camp, our house sitter has been booked, and we are almost ready for our romantic Southeast Asia trip. It's hard to believe it is here!

With Montana being at camp, the only way we can communicate with her is through fax or letters. We usually set up a fax to email service so she can fax us whereever we are. This works great as we get to hear from her and her adventures while we are away.

This year we are also going to send her a postcards showing our travels. I hate buying and writing out postcards while traveling. I never know which one to choose and to be honest I think it is a waste of money as it really doesn't show what we are up to on our travels.

Recently I found Hazelmail. It is an awesome service where you upload a photo you took while on vacation and can mail it to your loved one. They do all the work - all you do is upload the photo, add your message and address and hit mail. They also have a prepaid option and an IPod App that makes it really easy to send the postcards.

I tested it out with a photo from our trip to Australia last year. It is addressed to our dog Gracie :-)

This is how it looked (sorry the photos ended up a little fuzzy): 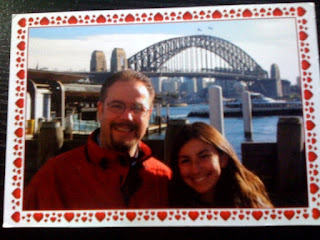 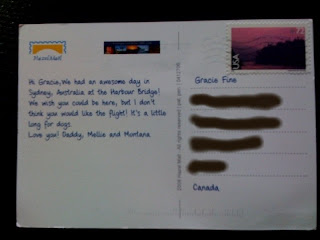 I am looking forward to sending her postcards from our upcoming trip from Hazelmail.

Have you tried it? Will you? If you do please tell me how you like it!

Every summer we try to plan a larger trip. Last year was Australia and Hawaii with Montana, Year before was a Romantic Hawaii cruise and stay on the Big Island. The year before was a trip to NYC and a cruise on the Norwegian Dawn .

This summer, due to great airline mile accumulation and deals, we have chosen to go more exotic and romantic, and have planned our trip to Macau, Hong Kong, Kuala Lumpur and Thailand. Montana wanted to go to camp all summer, so that gave us some great options.

The flights are booked, hotels are booked, and now the question we are asking is: "what shall we do while we are there?" So I started researching.

Do you have any ideas that could help? I would love to know what you have done, or would want to do in Macau, Hong Kong, Kuala Lumpur and Thailand (Bangkok and Phuket).

Or do you know a great site for reviews and video of awesome and romantic things to do in these places. We like to have experiences more than sight see if that makes sense.

Is it time for a Romantic Vacation with your significant other? Check out these Romantic Escapes at Expedia!