@Globetrooper posted this on their facebook page this morning and I couldn't stop laughing. It sounds like a conversation in our house. Warren LOVES status miles. He does what he can to get them. He hit SuperElite status with Air Canada and the Star Alliance network last year and again for this year. Some people think he is crazy, but it really does make travel easier and more fun. I can't remember the last time we sat in coach as he has a ton of upgrade coupons etc with his status (and mine as I have Elite status).

Are you obsessed with frequent flyer miles and status points? Share with us in the comments!
No comments:

While in Bangkok, we toured the Grand Palace with a private guide. It was an amazing experience for us, as she is a Buddhist and really wanted to share her beliefs with us. We made offerings and enjoyed the temples, the Reclining Buddha and watching the school kids enjoy their day trip to their Grand Palace.
We enjoyed taking photos, and admiring the beauty of the palace and the temples. There are over one thousand Buddha images, including the famous Reclining Buddha.
While resting and enjoying the temple, we were privileged to experience the Monks come into the temple and start their meditations. It was peaceful and a highlight of our trip to Bangkok. 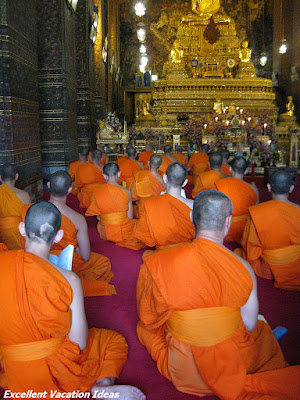 Photo of the Week - Las Vegas on New Years Eve.

OK, so this week's photo of the week isn't anything beautiful or spectacular, unless of course you love crowds and New Years Eve! This past holiday season, we chose to rent a house in San Diego, spend a few days in LA (Montana had never been to LA) and spend New Year's in Las Vegas.
Find the best deal, compare prices, and read what other travelers have to say about Las Vegas at TripAdvisor
We had ALWAYS sworn we wouldn't go to Las Vegas for New Years, but this year we thought "Why Not?" We had a blast!
We started with dinner at Craftsteak at the MGM (that is where we were staying), which was amazing and way better than any other time we had eaten there. We then took our hats, blowers and champagne out to the strip.
The Las Vegas strip closes on New Years Eve to traffic from 5 pm until 5 am. (This makes traffic a nightmare) There were DJ's blasting great music and music videos and people everywhere. We were told there were over 325,000 people on the strip! It didn't feel overly crowded though. 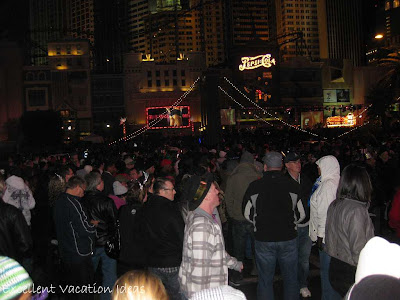 Just before midnight a girl in the crowd let her champagne cork loose, and the bottle was pointed at my butt :-). Before I knew it I was covered in Champagne, oh well, when you are with 325,000 people celebrating the new year, then you can't expect not to get a little wet!
For the countdown to midnight, the large screens on the hotels starting counting down, midnight came and there was an uproar from the crowd.  $500,000 of fireworks were launched off the roofs of the major hotels and everyone was excited and happy!
We are really glad we did this for New Years Eve. I don't think we need to do it again though. We like Las Vegas when it is nice and quiet.
How did you spend your New Year's Eve? Comment Below:
No comments: