What is your Scariest Travel Experience?

This morning I was reading something somewhere on the Internet about scary travel experiences. It's interesting because I have been to every continent except Antarctica, and my scariest travel moment was as I was flying into Moscow in February of 2000.
My sister and her husband had adopted a baby from Kazakhstan. She had to spend a few days in Moscow to get approvals from the Canadian Consulate for my niece to be admitted into Canada. My parents and I were in Europe on business (back when I worked for the family business) so we 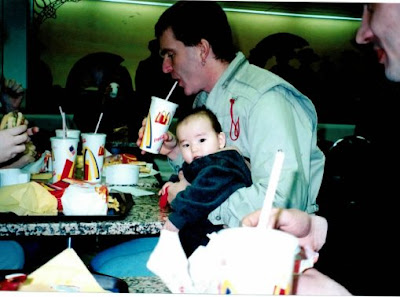 decided to detour to Moscow to spend it with them and to meet the new member of our family.
Yes we had to eat at McDonald's - It was a Canadian initiative after all!
I grew up in the 70's and 80's. Even though I grew up in Canada we were still "concerned" about the USSR. We had heard stories about how people were treated and how they would have to line up for hours to get bread and food. And of course the "nuclear" threat.
The flight from London to Moscow was on BA. They showed a movie called "East/West". It was nominated for an Academy Award for best Foreign Film, and it was a really well made movie. It told a story that should be told, just not a great idea to show it while flying into Moscow.
The movie was about a Russian Expat Doctor who was asked to come back to Russia to live and practice. Stalin asked many soviets that left the USSR after WWI to return and help to "rebuild" the USSR with no repercussions for fleeing in the first place. Well of course Stalin lied and killed some as soon as they arrived, or in the case of this family took the French wife's passport as soon as they arrived and then pretty much treated them like prisoners.
As we landed my heart started racing, I was shaking and my face was flushed. My dad actually asked if I was OK.... He didn't watch the movie - he was safe!
My logical mind said - don't be silly...this doesn't happen anymore - it's the year 2000 - the new millennium - the wall fell ages ago...People visit here safely all the time...my my emotions said - "What are you Crazy????" 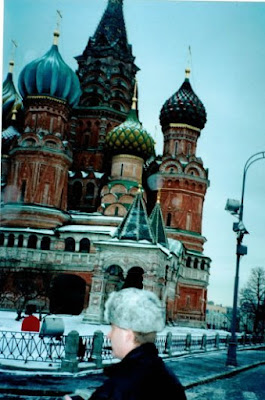 I was so flustered I left my laptop ON THE PLANE!. I rushed back to get it and 2 very stern security personnel (with guns I might add) told me in Russian (at least I think this is what they meant) - that I had to turn around and go back - I couldn't go back onto the plane! I knew it - this was a plot to steal my stuff like they did in that movie. Well OK I am exaggerating a bit!
I stood in the very long immigration line up...with my papers in hand...still fearful....who knows what might happen once we get past that line.
We then got to the baggage claim and low and behold a flight attendant had taken my bag off for me. Whew!
We went through customs and found a taxi...The rest of the trip was AWESOME and we got to meet my beautiful niece for the first time later that night.
In my 4 days and touring around in the cold. They only time I got "hassled" by the authorities was when I was in a taxi going back to the airport - they wanted to see my papers - I happily obliged.
So it was just my mind that made it all up! I guess that is the power of the mind.
The lesson I learned - Don't make up what isn't there .. stay present while traveling. Assess what is actually going on..Not what you think might happen!.
I asked on Twitter today "What was your scariest travel experience?" I got some great responses...
From children and parents being hassled in Jamaica to have their hair braided...To a smoke filled plane from Jakarta to Bandung .... To trying to vacation in Tahiti while a huge and violent protest was going on over a French Nuclear Testing program nearby. (thank you on twitter to those that responded!)
So what is your scariest travel experience? Please comment below!