Ok – I know – I am late in sharing our adventures in both Sydney, Melbourne and we have already had 2 days in Port Douglas – My only excuses are – we are having lots of fun and Warren and I caught horrible colds – so most of our energy is going to enjoying our trip!

So where was I – Oh yeah – Second day in Sydney

Matrix Tour – at 10 am we met up with Janice from Sydney Movie Tours. http://www.sydneymovietours.com.au/

We contacted Janice before we arrived in Sydney and asked her to do a specialized tour of the Matrix as it was filmed in Sydney and Warren is the biggest Matrix Fan! So it was perfect! Wow what a tour! Janice was great! She brought a DVD player and showed us the scenes first then showed us the spots. We walked for what seemed like miles and got to see some amazing spots! We even got to “act out” the scene in front of the waterfall with the “Girl in the Red Dress” on Martin Place.

Fountain where the "girl in the red dress walks by" 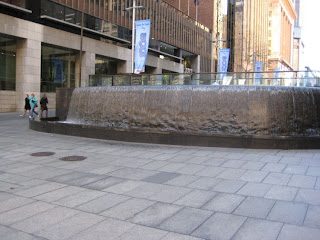 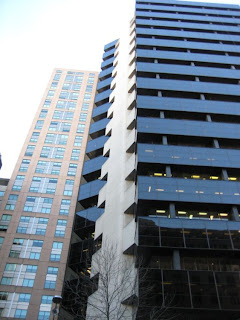 Mr Quack is pretending to the the black cat in the "deja vu" scene - where Neo sees the Black Cat twice and Trinity says "Oh no they changed something in the Matrix!" 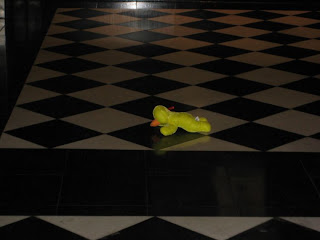 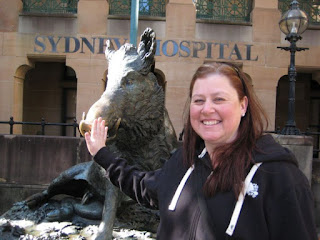 We ended up at the Sydney hospital and rubbed the Boar's nose for good luck! 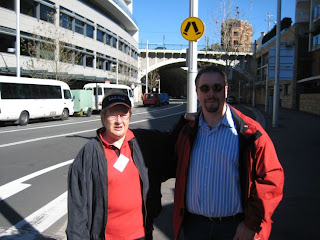 After the tour we ended up at the Rocks area, and had lunch at a hotel. This was one of the first places we felt a bit of misplaced prejudice. – food was good – service was rough. But Montana got to try her first Aussie Meat Pie – mmmmm yum!

Here is a Video I put together of our Matrix tour:

Next we took at taxi back to Paddy Market (the proper market was on today – like a flea market of sorts). Montana was in heaven! She bought a sweatshirt and a scarf! We looked for UGG boots and enjoyed the time. 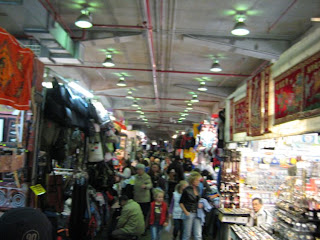 Warren got a little bored so he decided to go to the casino that was nearby. Montana and I got some girl time and ice cream and sat down by the harbor at Darling Harbor. It was fun. We then walked up to Pitt Street Pedestrian Mall for some shopping. We met Warren back at the Apartment and Warren had great news! He won some money at the casino and we all decided that we wanted a nice dinner out. We both saw the same place for dinner and suggested it at the same time! It was a great seafood restaurant in Darling Harbor called Jordans. http://www.jordonsrestaurant.com.au/home.html (We have since learned that Jordan's has closed their doors - we are sad to hear that!) We walked over and had a discussion on whether or not the pedestrian bridge over the harbour moved for boats. Well I didn’t think it did as the monorail went over it – Warren thought it did. Well as he decided maybe I was right, the horn blew as we were walking over it and everyone made a mad dash! We couldn’t believe it. Apparently it does move but not often – only once a day max and we were talking to a guy who lived in an apartment overlooking the bridge and he said he has never seen it move! It was freaky and really cool to watch! 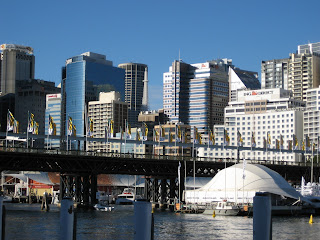 We had a great dinner, Montana had steak and Warren and I had fish. My first taste of Barramundi since I arrived back in Australia! YUM!
We sat outside and wished that Toronto had a harbour like this to enjoy!

Back to our cold apartment to sleep!

Tomorrow our day tour to the Blue Mountains!