The day started off great except Warren's cold started and I thought I might get one too. We started out at 7 am and came downstairs to see a small turqoise tour bus. Tish our wonderful tour guide was right on time for our pickup in from of the apartment and greeted us and set the pace of the day.

We had one more pickup but the person was a no show…so it was the Canucks - Team Canada and the Brits - Team Yorkshire - 6 of us including Tish for the day! We were off for a grand old day.

We had to drive over the Sydney harbor bridge and enjoyed the great view as we circled below first and then up on the bridge (left hand side).

Through some tunnels and onto the Featherdale Park - an Australian Animal park. We were concerned about the weather but were pleasantly surprised by how great the weather and the visit to Featherdale was. There were few people there as we arrived before the park opened and were excited to practically have the place to ourselves. We even got to see the Joey poking out from his mother’s pouch! We all got to pet a koala and Warren got to see a Tasmanian Devil! 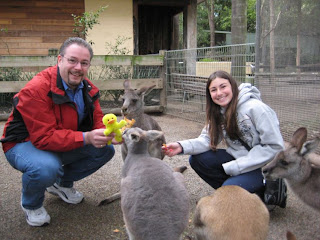 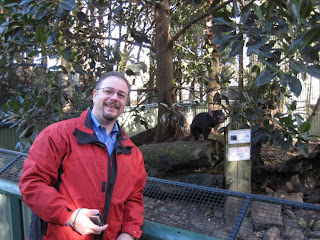 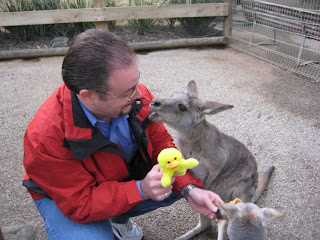 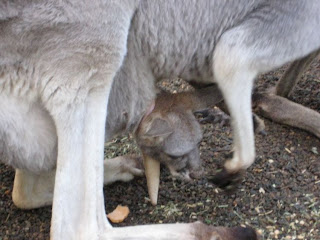 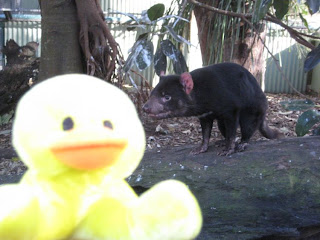 The weather turned as we left the park and went to our first lookout. Tish made it work! She was awesome in preparing us for the colder weather etc. and she took us to a cool cave where people actually lived in the depression at this first lookout. 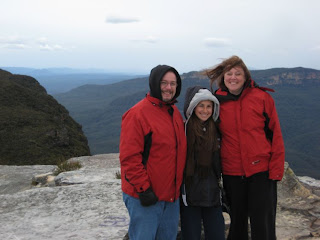 It was really windy and cold but the views were as spectacular! As the winds were, getting close to the edge of the gorge was exciting to say the least as the winds were about 45-60 km/h . Warren was brave and wanted to get the best view so he crouched down to lower his center of gravity and get a good shot….we have a picture of him close the edge.

Next stop a Freezing cold windy walk to see the "Three Sisters" - as seen below. We lasted long enough to take a picture then ran back to the warmth. Tish then helped us decide what rides at Scenic World we wanted to do. We were concerned it would be too cold to do them, but Tish assured us that they would be ok. She was right! 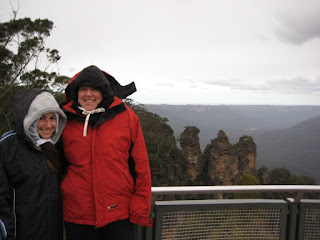 First we took a cable car along the canyon, then the cable car ride as it was so windy they should have called it the sway ride but it was fun never the less. Trish met us on the other side and took us to the steepest incline ride in the world! - It had a dropcable car ride where the drop is at a 55 degree angle….doesn’t sound like much but you start off lying down and end up standing up.
We took a quick tour of the mining area at the bottom of the ride and the queued up for the cable car ride backup. A quick wander through the gift shop and we were off to lunch. We were really ready for lunch! We were starving!

Lunch was at the Wentworth Country Club where we feasted on fish and chips, Chicken wings, salad, pasta, wine soda, and apple crisp for desert. The restaurant had a great view overlooking their golf course but by this time it had started to rain heavily and we didn’t go back outside! We decided to wander around the shops in the town of Leure and then drive back to the Sydney Olympic Park. Warren had a long nap was interrupted buy a stop at a UGG boot outlet - Melanie and Montana bought comfy slippers and back on the road - I started to feel a cold really come on!

The tour ended off with a trip around the Sydney Olympic park where we got to look at pillars of the 45,000 volunteers that made the games such a success. We even found a "Melanie Bishop" on one of the poles. 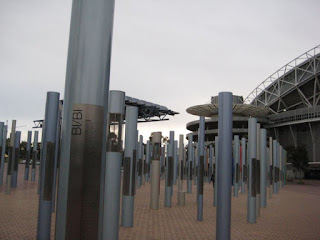 Tish said her good byes and we boarded the ferry back to the Rocks area and Circular Quay in the CBD. We got a fantastic view of the bridge at night, even thought the weather was bad the boat ride was warm and comfortable. Montana and I went to the front of the boat OUTSIDE and it wasn’t too bad windwise We has a much better view, Warren joined us for the last 10 minutes. The view of Sydney at night it was great, Montana figured out the night mode on the camera to make our evening pictures that much more special.

Tish was a great tour guide and kept us informed throughout the tour. I would definitely recommend Sydney Wilderness Tours to anyone wanting to see the Blue Mountains - We loved them as Tish made it work even though the weather was poor we had a great day!