Andy and Michelle's Wedding at the Hilton Hawaiian Village - Day 1

We just returned from a wedding in beautiful Waikiki, Hawaii on the island of a Oahu. We went for our dear friend's, Andy and Michelle Walker, wedding. It was a lovely, lovely few days, and we will cherish them. 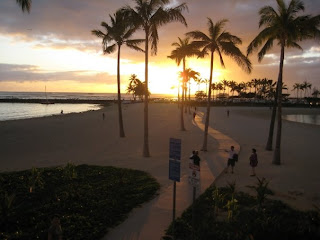 Unfortunately we did not have enough time or a lot of time to spend on this holiday as it was a last minute idea for everybody to go. But we decided we would look into it and sure enough, we found a good rate - with a route of Toronto to Vancouver and then Vancouver to Honolulu.

Just a thought about the type of trip over here for air travel to Hawaii from the East Coast - as Toronto is considered to be the East Coast. It is about a 4 1/2 hour flight from Toronto to Vancouver. Then we had a three hour layover, and a then a 5 1/2 hour flight from Vancouver to Honolulu. We've also done a trip to Hawaii before where we did a 1 1/2 hour flight to Chicago and then an eight and a half hour flight to Honolulu. I much preferred the short flight and then a long flight for the main reason that you can actually rest on the plane -that is if you can sleep on planes. You can get a good four hours or so sleep, if not more on the longer flight. However, I wanted to try flying to Hawaii through Vancouver so this worked out perfectly.

The actual flight times worked out quite well for us as we arrived in to Honolulu at approximately at 9:30 p.m.. This was good because by the time we got to our hotel and got checked in and settled, we were really really tired. So we just went straight to bed, which really helped the jet lag, in fact, we didn't find that we had any jet lag pretty much the whole week. The only thing that I noticed was that we were waking up really early in the morning so we would wake up at like seven sometimes earlier - sometimes 6 a.m.. This actually worked out quite well, because we could do work out and communicate with people at home since there was a five hour time difference Toronto.

We booked the Grand Waikikian - the time share property at the Hilton Hawaiian Village. They had overbooked at the regular village and were moving guests here so we were upgraded to a 2 bedroom condo - which was brand new, beautiful and awesome! 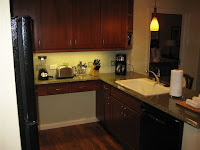 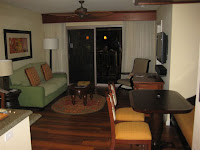 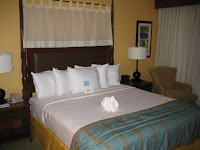 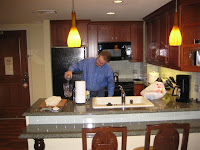 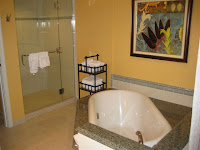 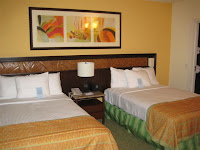 So on our first morning in Hawaii, at the Hilton Hawaiian Village hotel, we met Andy and Michelle, Michelle's son Kyle, and her niece, Hannah, at the Tapa's Café for breakfast. They do a pretty good spread for a buffet, both a hot and a cold buffet. On the cold buffet, you can get cereals, lots of fresh fruit, cheese, hard-boiled eggs, all your grains, like mini bagels and toast, cream cheese, and smoked salmon. On your hot buffet you could get your traditional American breakfast with scrambled eggs, bacon, and sausage, and hash browns. The breakfasts were quite expensive as they usually are in hotels, $20 for the cold buffet and $30 for the hot buffet.

We normally try to book a condo or something that has a fridge that we can have our own breakfast in our room and sometimes we even bring a box of cereal. However since we were traveling for the wedding, and we wanted to eat with our friends, we had breakfast a few times in the Tapa Cafe and Warren had breakfast one morning in the Rainbow Lanai restaurant in the Rainbow Tower of the Hilton Hawaiian Village. Warren had this with the boys on the day of the wedding as we were trying to keep the bride and groom separate on that day. 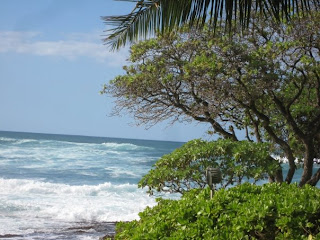 After catching up and getting up to date on wedding plans, we decided to rent a couple of cars to drive up to the North Shore. Andy and Michelle had not been out of Waikiki since they had arrived, and Waikiki can be quite overwhelming. It is more like a big American city, like Miami, than it is traditional Hawaii.

So because they had to get their marriage license in Hawaii, they thought it would make sense to rent a car, pick up the wedding license and then drive up to the North Shore. We told them about the Turtle Bay Resort as we been up there quite a few times, and we really wanted to have lunch up at the restaurant Ola, that overlooked the beach at the resort.

They learned one lesson that I will happily pass on - if you are getting married in Hawaii and you need to get a marriage license - don't go on Martin Luther King Day or any other public holiday.

Thankfully, the lady who does the marriage licenses was actually quite helpful as she left a note on the door of the licensing office telling people a number to call them and where to go to get their license if it's a holiday or a weekend. So they went over to this lady's house and they signed everything they had to sign and they took their oath and they got their marriage license all in her driveway. Then they were on their way.