Continued from this post - click here.
Since we had already started the drive up north, and we were a little hungry, we stopped at the Dole Plantation. 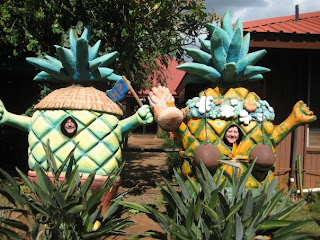 We had been there before, in our opinion it is a tourist trap, but we needed some refreshments. So we stopped and got a cooked cob of corn from a local guy and his daughter - selling it next to the Dole Plantation store. We then took another picture with the pineapples (at the plantation next door) and were on our way. (click here to see the original picture - they have fixed the bra on my pineapple!) The place was packed with tourists and tour buses so we didn't want to stay long.

It was a little bit longer to drive up to the North Shore than anticipated - due to the public holiday, but other than that it was fairly easy until we actually hit the main road at the top of the island on the North Shore - Highway 83. 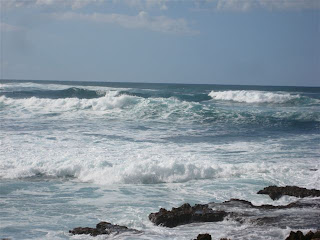 All the people who live in Oahu, I think, were trying to get to the North Shore beaches to do some of the amazing surfing on the public holiday. So it took us at least 30 to 40 minutes to drive what will normally take 10 minutes along Hwy 83 -the road along the North Shore.

After a lot of texts back and forth with Andy and Michelle, and a slow drive, we made it into the Turtle Bay Resort - ready for a great lunch! At the time they were doing some construction on the road and on the entrance way but other than that the resort was as we remembered it. 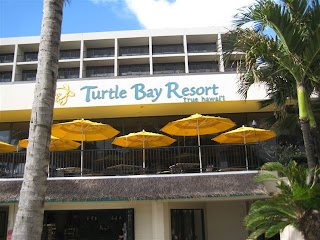 When we arrived at the Turtle Bay Resort, we drove up to the security kiosk, and mentioned that we were going to eat in a restaurant down by the beach - Ola. He said, make sure you have a hamburger it's the best burger around. We told him how we had made the journey back to the resort just for the burger! So we drove around to try and find some parking.

Now all of the beaches in the State of Hawaii, are public beaches and therefore hotels can not restrict access to any of them. However, they only have so much parking. So each hotel, will charge what they want to for parking, but they can't deny you access to the beach. So the parking because it was a holiday was also quite busy and hard to find a spot.

But we finally found a spot and walked over to the restaurant that we had drove all the way up here for - OLA. This restaurant was featured in the movie, "Forgetting Sarah Marshall" - as was the resort.

Warren went in to get a table for the seven of us that were coming for lunch and it was three minutes past three. I went to the restroom (It was a longer drive than anticipated!) and when I returned Warren was talking to the host or the owner or the manager of the restaurant. It didn't look good - The man quite insistent that he could not seat us as they close between three and five to prepare for dinner.

Now, if you ask me a restaurant of this calibre should serve you if you arrive at three o'clock for lunch, however, there was no moving him, so we went to the front desk, found out that the only restaurant serving was the pool bar, and we took a whole bunch of pictures all over the Turtle Bay Resort.
Lesson learned - Check with restaurants - before making the long drive on the hours - they serve!

They told us we could get a hamburger at the pool bar - and that is what we had a hankering for - so we texted Michelle and Andy and told them what was going on. By the time we got there, however we were famished! The awesome waitress caught on to that and immediately brought us both a drink and I bucket of bar nuts and chips, and we ordered our burger!

The view here was beautiful! We were looking over both the surfing area of the North Shore, and the pool area. The waves were incredible! They must have been 10-15 feet high and the surfers were having a blast! It was absolutely spectacular!

Our burgers arrived and they were just what the doctor ordered - and huge! We highly recommend the burgers at the Pool Bar as well as Ola.

Finally Andy and Michelle and the rest arrived, and they ordered their late lunch/dinner. All around the food was good. So in the end we still had an a great meal and enjoyed a different view.

The kids were excited about the water so we wandered over to the calmer beach and the kids went for a swim. They had a great paddle around and did a little snorkeling, while the grown ups (that's us!) had a chat. 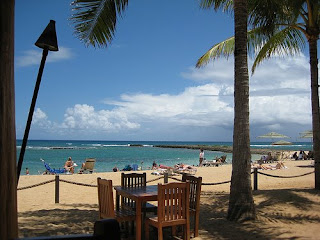 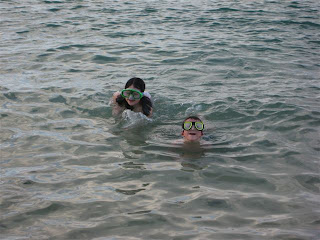 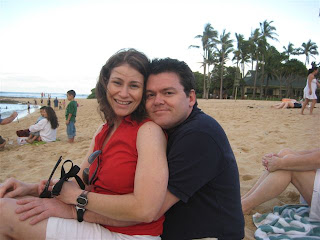 The Happy Couple! Andy and Michelle 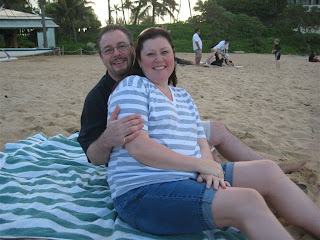 
The sun started to go down and it was getting cooler so it was time to go. We caught the sunset through the trees on the way out of the resort. 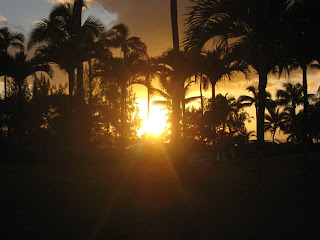 Note about the winter weather in Hawaii - This past winter (we were there in January 2009) was quite cool for Hawaii. The local Hawaiians were complaining how cold it was. The air was cooler at night (needed a light jacket or sweater) and the water was colder than normal - make sure you check on the weather before you go - as many people had to buy sweaters etc. as it was too cold at night.
We got back on the road and the drive was easier and quicker as most people had already left the North Shore. We stopped at a Foodland for some supplies for our condo - it was wild as you could really feel the beach culture. i.e. people coming in after surfing in swimsuits and no shoes.
Just a note - items were quite expensive in the Foodland on the North Shore - most likely as there weren't many other stores around.
Once we arrived back at the hotel everybody was tired, so the kids went to bed and Andy went to the airport to pick up his parents who are coming in from New Zealand after there Australia and New Zealand trip and cruise.

Warren returned the car - 15 min late - they closed at 7:30 - (Alamo near the Hilton Hawaiian Village). We didn't want to pay for parking at the hotel and wanted to return the car on the same day. They were still there so they allowed us to return the car, but not without complaining about it of course :-)
Note: - if you can return a one day rental on the same day to avoid parking charges at your hotel - they can be $20 or more per night!
Michelle, Warren and I had a drink and waited for Andy to return. It was a nice quiet way to end a great day out!
Onto Day 2 - Swimming in the Lagoon and last minute errands for the wedding!