After Saturday night we didn’t think the weekend could get any better. We were wrong. Hard to believe it but we were.

Andy and Michelle had a sleep in, while Warren and I had to get ourselves packed up as we were on our way to the Skylofts. We went for breakfast in the Augustus Café, and then finished checking out of the beautiful Caesars Palace.

The front entrance and driveway of Caesars Palace were packed with people leaving as it was Sunday morning after a really busy weekend in Vegas.

I could see a silver car inching up the driveway with all of the other cars, taxis and limos. I asked the bellhop for our bags as our ride was here – it was the beautiful silver car. The bellhop was completely overwhelmed and said that it would be a few minutes. 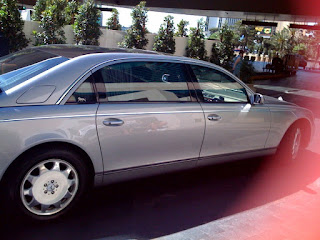 Note to self: when you have a ride waiting for you – luxurious or not, take your own bags, or start the process earlier. It took at least 30 minutes to retrieve our bags.

The limo driver was of course gracious and asked us if we would like to wait in the car. He dealt with waiting for the bags. How can I describe what happened next?

We got in the car and my first impression was “boy it smells good in here” I could smell the leather, it was awesome. As I sat in the seat behind the driver, I couldn’t reach the dividing wall where the TVs were.

The seat surrounded my body like it was made for me. Warren started playing with buttons and the next thing we knew he was lying out flat in a recliner better than any I have ever seen. It was first Class plus. It was incredible and to honest a little overwhelming.

But I let that go and sat back and enjoyed the wait. The sun roof was incredible. In the touch of a button it would change from opaque to clear instantly. The driver finally found our bags, and we were on our way. We had a nice chat with the driver, he showed us the features of this $200,000 car – yes I said $200,000!!!! It was bullet proof (which is something I am always looking for in a ride) and was incredible to drive or drive in for that matter.

We drove past the In and Out Burger and thought that we should take it out for burgers one night! According to the driver this is a regular occurrence. 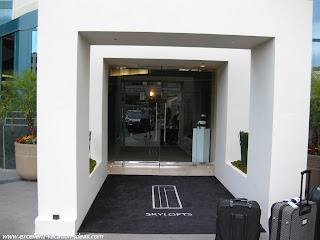 He called ahead to the concierge to tell them we were on our way, then called again as we approached the Skylofts entry and Lobby. We were greeted with a bell man and the Concierge. The Concierge opened the door and said “Welcome to the Sky Lofts Mr. and Mrs. Fine” She asked if she could escort us to the Skylofts and said that we would do in suite check in. Ah yes please!

Are you looking for Las Vegas Hotels